In order to build our CICD platform, we will start with the creation of an artifact repository. The artifact repository can be used in various locations in the pipelines, has no dependencies itself, and as such it is a great starting point.

This repository will hold all the binaries for our project: it will store and distribute the deliverables and all dependencies. This ensures that all developers use the same binaries, and that the exact same binary goes to production. It provides a central location for managing and securing the libraries that are used in the tools. Furthermore it can host build plugins, docker images and tools that are required by the CICD platform itself.

We opt for Nexus, since the opensource community version provides support for docker. Competitors like Artifactory do provide the same, but only for the commercial version. Since this project is for home use, we choose to go cheap.

This post is part of a series about creating a continues integration platform for home use.

Lets start off and create a folder to hold our environment.

It is a good idea to put this folder under version control right now. It will contain critical configuration for your project, and you will want to have proper version management in place for the files in this folder. We will keep version control out of scope for this walkthrough, but is good to remind yourself to commit your changes regularly so that you can quickly reproduce the system if needed.

Ironically, the CICD workspace repository is the only repository that won’t have a build pipeline attached.

Next, we will create a simple docker-compose.yml file to start our repository. Start your editor and create the file.

That is it. We can now start our first container and use the browser to configure it.

Start the container by typing the following command on the command-line:

The up command tells docker-compose to pull the base images from the internet and to do the initial setup for the containers and volumes.

You will see a log-trace on the terminal about downloading the image layers from docker, followed by the following lines:

Let it run for a minute, nexus takes some time to setup the data store for first use.

Start up your browser and go to the nexus web page on http://localhost:8081/ It should show you the welcome page. 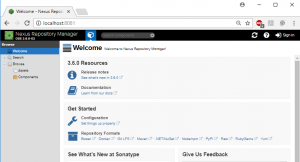 It might seem a bit overkill to create a compose file for just one docker image, but it will become clear in the next blogpost. Nexus by itself doesn’t provide the secure access that is required by docker to use it as a repository. We will need to add a reverse-proxy, like Nginx, to hold the openssl certificates and to encrypt the communication.

In the next blogpost, we will setup the Nexus repository and prepare it for use with docker.

Next: Creating a CICD setup for home use →

The post Creating an artifact repository appeared first on BIT.